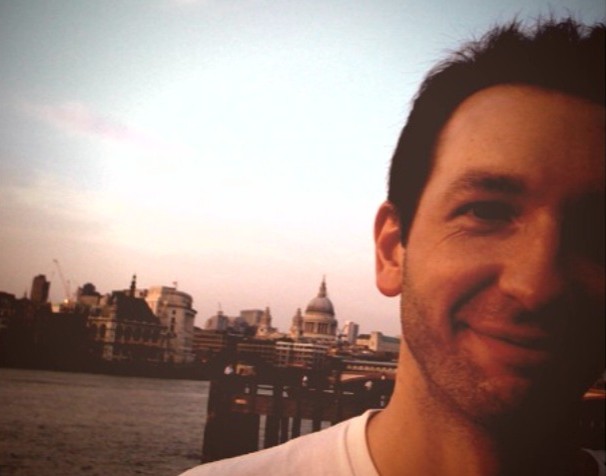 This time we welcome David Varela to our 15 Questions interview.

Most of you will suspect now, that he will give us some insights of the work behind the curtain of Perplex City, like Andrea did in our previous interview. Others already know that he sometimes walks over the Playstation Home Plaza just to meet with the players of Xi.

What other little secrets will he share with us by answering our questions?

01. About when and how did you get in touch with ARGs

It started back in 2005. I saw an ad in The Guardian newspaper written entirely in code. Unscrambled, it was a call for all kinds of creative people – writers, designers, programmers, directors – for Project Syzygy, which later became known as Perplex City. There was a rather long recruitment process but, by the end of the year, I’d managed to get a job as an in-house writer. It went from there.

It’s an oocupational hazard but I tend not to play many ARGs these days – and there weren’t all that many to take part in before I started. I wish I’d been part of the excitement that surrounded The Beast and I Love Bees and Majestic and those formative games that still have such an influence. I dip in and out when I can now, for fun as much as for research. I’m very proud of my Flynn Lives t-shirt .

But I’m just as intersted in transmedia experiences that you wouldn’t really categorise as ARGs. The role-playing games popularised by Games Workshop. The theatre work of Coney and Punchdrunk. Hide & Seek’s live games. I like to keep my horizons as broad as possible.

03. In which ARGs have you been Puppetmaster/BHTS and what was your job in those?

Perplex City was where I started, and my role changed a lot during the 18 months I was there. The ARG team was always multi-tasking, but I ended up writing, working on puzzle ideas, managaing and maintaining the Story So Far site, and producing most of the audio and video content. By the time we madeFrozen Indigo Angel – a crossover between Perplex City and BBC Radio 1’s Big weekend Festival – I was a very busy boy.

When Perplex City ended, I wrote a short ARG named Emergency SubNET to promote an animated TV show called Afterworld for Channel 4. Then I joinednDreams, where I was producer (aka puppetmaster) on Xi for Sony Playstation and now I’m writing and producing Lewis Hamilton: Secret Life.

You never forget your first time, so my totally biassed answer is Perplex City. I think it was visually wonderful, fantastically inventive, and I had so much fun working on it. I still meet people who played it and remember it fondly and the whole community it brought together was amazing – not to mention the talented bunch of people who made the game.

Sometimes I have to remind myself that I actually get paid to do what I’m doing. When we were recording the audio of Monica Grand’s murder in Perplex City, we were crammed into a bathroom smashing a melon with a hammer. That was crazy enough, but later some of the players reported having nightmares after listening to the recording, which is very satisfying for a writer. It means you’ve made a connection.

Maybe this is a worrying insight into my mind, but the death of another character, Anna Heath, has also stayed with me. As Andrea Philips mentioned in a previous 15 Questions, the players made hundreds of origami cranes in her memory, and I still keep one on my desk as a reminder of how these stories can affect people.

On the flip side, I had a great time going walkabout in PlayStation Home using the avatar of one of the in-game characters and just chatting with players at the end of Xi. They were so happy to see him. I love having the chance to interact with players close-up like that and see how they respond.

06. Are there any memories to happenings that you wanted to forget about?

Things don’t always go to plan, and at the time, it can be extremely stressful. But I never want to forget them. The fact is that, no matter how bad things have got, I’ve always been lucky enough to find a way round each obstacle – and that gives me a sense of belief whenever the next obstacle crops up. There’s always a way round.

07. How do you explain ARGs to your family / friends / relatives and how do they react?

My brother is quite tech savvy so he gets it, but my parents are still pretty mystified. They’re waiting for me to get a proper job.

08. Which 3 things does an ARG really need to have, to be a good ARG in your opinion?

1. Interactivity – a sense that the characters are listening, at least, and will respond to you. The more immediate that is the better.

2. Story/character – they say that ‘story is character’, so I think I can sneak in two things at once here. People need to make an emotional connection with your main characters, so showing that they have foibles and flaws and don’t always do the smart thing is very important.

3. Fun – despite what some people believe, this is a game. Even if you’re dealing with the most disturbing subject matter, a good ARG still needs to be entertaining and enjoyable.

09. Do you have a favourite character from an ARG?

My personal bias is showing again, but I’ll always have a soft spot for Caine in Perplex City because I wrote his blog and he was a huge amount of fun: a hard-drinking thrash metal mathemetician whose laid back demeanour hid a cold-blooded disregard for human life. Something for everyone there.

10. What are you currently working on? (if you may tell us/are allowed to tell us 😉 )

Lewis Hamilton: Secret Life, which lets you into the secret adventures of Formula 1 driver Lewis Hamilton. In between races, he recovers stolen works of art from around the world. It’s like Ocean’s 11, but instead of 11 people, Lewis has thousands of players in his crew, helping him plan and pull off each heist. It’s all free to play and it’s running in nine languages simultaneously.

The second episode is about to kick off, so go to www.SecretLewis.com if you’d like to join in the fun.

11. Which puzzle from past ARGs do you like best/was real fun? Can you tell us why?

Again, it’s an event Andrea mentioned when she did 15 Questions: a ‘live text adventure’ that four of us wrote for Perplex City. It was essentially an elaborate chat program, inviting players to play with the artificial intelligence (that was us) in a classic 1980s style text adventure. We prepared a few set pieces in advance, but most of it was written spontaneously in reaction to the players’ interactions. It was improv for writers. And it’s probably as close as I’ll ever get to jamming with a band in front of a crowd. I loved every minute.

Right now, the one phrase that keeps coming up in our studio is “Don’t f*** it up.” Things are going well, so we want to keep it going. That’s got to be a good sign.

13. Do you remember a situation, in which you wanted to give up anything? What happened?

On Xi, we planned a giant anagram puzzle which involved booking billboard space in eight European cities simultaneously – an expensive and tricky task to schedule. It was one of the first puzzles in the game and I was very keen to make it happen, to set the tone for the rest of the ARG. But our launch date kept moving and it became a huge risk for us. I was really torn, and we seriously considered dropping the puzzle and quickly writing something simpler instead. But we managed to organise it in the end and it was definitely worth it. We got some great press and the players loved it.

14. Was there something like a favourite item from an ARG that you didn’t want to give away, but you had to, because the IG-Character had to?

I love swag. Any physical object that comes from an ARG gains a very special value – it’s not just a souvenir, it’s a trophy. There are some very ordinary objects that I’ve found it hard to let go of, but the Receda Cube from Perplex City is a pretty amazing object which I’d love to have on my mantelpiece. Mind you, the reward for its safe return was £100,000. I’m glad that wasn’t my money.  That must have been painful to hand over, even if it was a joyous occasion.

I’m looking forward to ARGs reaching out into a wider variety of genres. The audience for ARGs is expanding, so the range of stories being told in ARGs will expand: different tales for different parts of the audience. Right now, people tend to talk about ‘the ARG community’ as a single group, but there’s already much more diversity than that label would suggest. And that means more interesting games for all of us, as both makers and players.

David, thank’s a lot for taking the time to answer our 15 questions. We hope to see a lot more great ARGs designed by you in the future and we are looking forward for the upcoming episode of Secret Lewis.