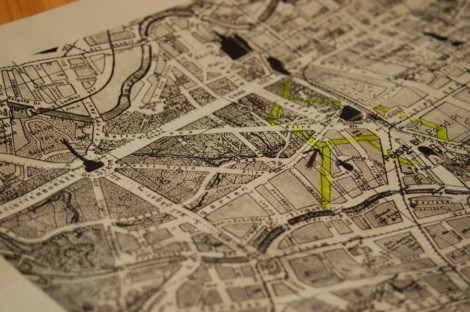 When have you seen your friends lately? Alive?

It was a few days ago when Tim saw his friends for the last time. Since then his friends have gone missing and left him without many traces where he can search for them. Someone unknown placed an envelope in front of Tim’s door. In the envelope there was a note reading „Kill Your Darling“ and some kind of software that helped Tim to gain access to a weblog called friendslost.de. There Tim is able to post new finds and to keep the viewers up to date. Some unknown person is posting to that weblog, too. This person makes available some videos of Tim’s friends that show what is happening to them within the last days.

In the first video we get to know Mike, his friend Nina and their friend Jenny. All three wanted to meet at a club in Berlin. There are some strange rumors in the wild about that club. So we get to know about a man called the „Fratzenmacher“. Hi shall be a murderer who stalked his victims years ago at that club, before he teared of the skin of his victims faces, but all these things have been happened a long time ago.

Is the „Fratzenmacher“ back? Will Tim be able to free his friends from the Berlin‘ underground, where they shall be right now?

All this will be revealed in every little bits within this new webby-project of the German television broadcaster Pro7. Of course there are some possibilities to interact with this webby-project. E.g. you may leave comments on the weblog. Tim does have a profile on the German Social-Network Lokalisten, so one can friend him there and try to exchange messages with him. (The missing friends do have profiles there, too, but since they are gone missing right now, they won’t be able to accept your friend request at the moment, but you will find some more information about their lives on their profiles.)

All these things are really nice, but the webbysoap is still way to passive, because there aren’t many ways to interact with the soap, their characters or anything else. Tim finds all the documents, talks to his friends‘ friends and discovers news about what is going on with his friends. The possiblity to leave a comment right after watching the new episode may be a little bit more thrilling than watching the soap on TV, because you have more room for your own imagination, but that’s all. The weblog makes use of shocking flash effects which are not really neccessary in my humble opinion. They are way beyond thrilling and disturbing and don’t help to tell the story. To follow this thrilling story may be fun for the next days, even though this is no ARG to play. We really want to know what is going on in the Berlin underground.