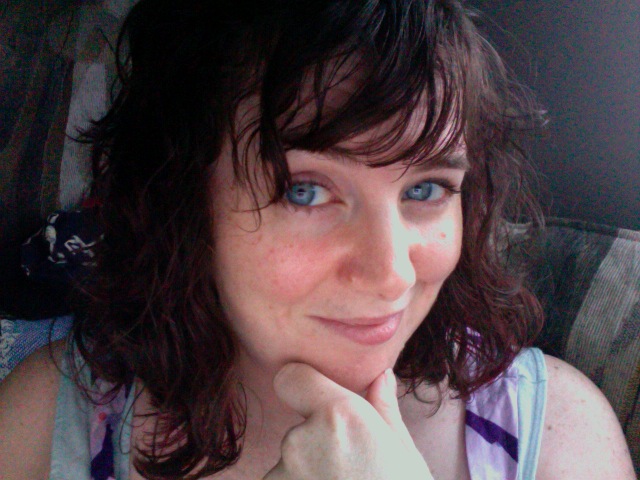 Some of you already know Andrea Phillips as a puppetmaster from ARGs like Perplex City or the 2012 Experience. Others know her, because she is currently in lead of the Special Interest Group „Alternate Reality Games“ of the International Game Developers Association.

And if you want to get to know her better, than you’ll have to read our 15 questions interview with her:

01. About when and how did you get in touch with ARGs?

Back in April of 2001, my best friend sent me a link to the Anti-Robot Militia website. We spent the afternoon chasing down links and wondering what the heck was going on. This was a part of the Beast, of course, so before long I was a Cloudmaker. Not long after that I was a Cloudmakers moderator, too.

Of course the Beast. After that, I burned out for a while; it was an intense thing, to do Trail updates and manage editorials and stay on top of the community. I try to follow games – ilovebees, Art of the H3ist, Eldritch Errors, Why So Serious, and so on. But I’m definitely a lurker and not a solver. It’s hard for me to engage with a game in the same way anymore, since I’ve become a creator. The games in the last couple of years that have kept me watching through to the end were Eagle Eye Freefall and Must Love Robots. And that’s because they made it easy to do in a low-commitment way.

03. In which ARGs have you been Puppetmaster/BHTS and what was your job in those?

I was involved in Perplex City, of course, doing a little bit of everything: so much writing, but also puzzle design, nagging other writers for posts and other production work. It was an amazing environment to work on, because you could find an opportunity to try doing just about anything. The other big projects I’ve done have been Routes for Channel 4 Education. I was the interaction design lead on that, which meant I defined the structure of the experience, the challenges, and the minigames. And for the 2012 Experience, I was the game designer and lead writer for the ARG. (Though a lot of great content already existed for 2012 when I came on board, and I’d hate to steal credit for it!) I’ve done snippets of work for other experiences, too, but you probably don’t really want a complete rundown of my resume!

Must Love Robots is my favorite right now, because it was so honest and sweet. It was also brilliantly designed to be easy to follow, even if you didn’t have the time to be a very serious player. I expect amazing things from those guys.

06. Are there any memories to happenings that you wanted to forget about?

No, nothing. If you forget something, that means you can’t learn from it. There have definitely been painful moments in my career, but that’s the only way to get better. If you’re not ever failing, you aren’t taking enough risks.

07. How do you explain ARGs to your family / friends / relatives and how do they react?

It’s been nine years now, and I still haven’t found a great way of describing it! I think with ‘transmedia’ I’ve finally hit on a way, though: “It’s telling a story in a lot of different places at the same time, like it’s something that’s really happening, and you can watch it and maybe help shape how everything turns out.”

08. Which 3 things does an ARG really need to have, to be a good ARG in your opinion?

A great ARG needs a great story, of course. That’s what makes it interesting. It also needs a great structure – that affects whether people can follow along casually, how easy it is to play and share, how people can find their way into the experience and know what’s happening, and so on. Without a great structure, it doesn’t matter how great your story is, because nobody will be able to work out what it is or where it’s going. And it needs total commitment from the development team. They need to be completely devoted to working together, planning, reacting to unforeseen events, and keeping the show going.

09. Do you have a favourite character from an ARG?

I’m terrible at picking favorites of anything. I love half the cast of the Beast, still – Mephisto and Mike Royal, in particular. And I really, really love O11iver fromMust Love Robots. Of course the Joker is amazing. And writing Charlie Frost was tons of fun.

10. What are you currently working on? (if you may tell us/are allowed to tell us 😉 )

11. Which puzzle from past ARGs do you like best/was real fun? Can you tell us why?

I’ve already mentioned Mike Royal – that was an amazing experience, calling a phone number and getting a real guy on the other end of the line. It was in the Beast, and you had to persuade Mike to help save a kidnapped boy. We’d never even heard of anything like that before, and it was electrifying. I think the most fun puzzle from my own projects were the live text adventures from Perplex City. They were incredibly fun to write, and I think the players had a great time with it, too. I’d love to do something like that again one day.

Balance, balance, game balance. There’s a tension between accessibility and depth you have to manage. You have a finite amount of time and money to spend, right? When you make a really deep experience, a lot of that material isn’t going to be available to the casual player. So my objective is to find that balance between making an experience that isn’t an iceberg, with 90% of the volume below the surface where the casual player will never see it… versus making an experience that goes no deeper than what meets the eye, and will be completely unrewarding to the player who is willing to dig a little deeper. The right balance isn’t the same for every game, either.

13. Do you remember a situation, in which you wanted to give up anything? What happened?

I’m still not sure why, but Routes was an incredibly difficult project for me, from start to finish. On the eve of launch, I was absolutely convinced it was the worst thing I had ever done, everyone who played it would hate it and hate me personally, and I would never work again. It was absolutely terrifying. By now, though, Routes has been nominated for a whole slew of awards and even taken a few home. Just goes to show you that the creator isn’t always the best judge of a work, eh?

14. Was there something like a favourite item from an ARG that you didn’t want to give away, but you had to, because the IG-Character had to?

I would’ve loved to get my hands on those escape craft tickets we auctioned off in 2012. And I’m still incredibly sad that I’m missing two cards from thePerplex City Season 1 set, and I’ve never seen any of the Season 2 cards in person, nor do I have a key.

I see the ARG dissolving into the bigger thing, transmedia. Before long, we won’t know where the edges are anymore. A lot of transmedia experiences will continue to pick and choose ARG tools to tell their stories, and I think a lot of new things will spring into existence that are phenomenal. Will those things be ARGs? Maybe they will be, and maybe they won’t, but at the end of the day I don’t think it matters. A rose by any other name would smell as sweet; I’m obsessed with this bigger thing, of finding the shapes that a story can take in an online world. Call it whatever you like, just don’t stop me from creating!

Andrea, thank’s a lot for taking the time to answer our 15 questions. We hope to see a lot more great ARGs designed by you in the future.

On her blog „Deus Ex Machinatio“ she writes about her projects and findings on the web.